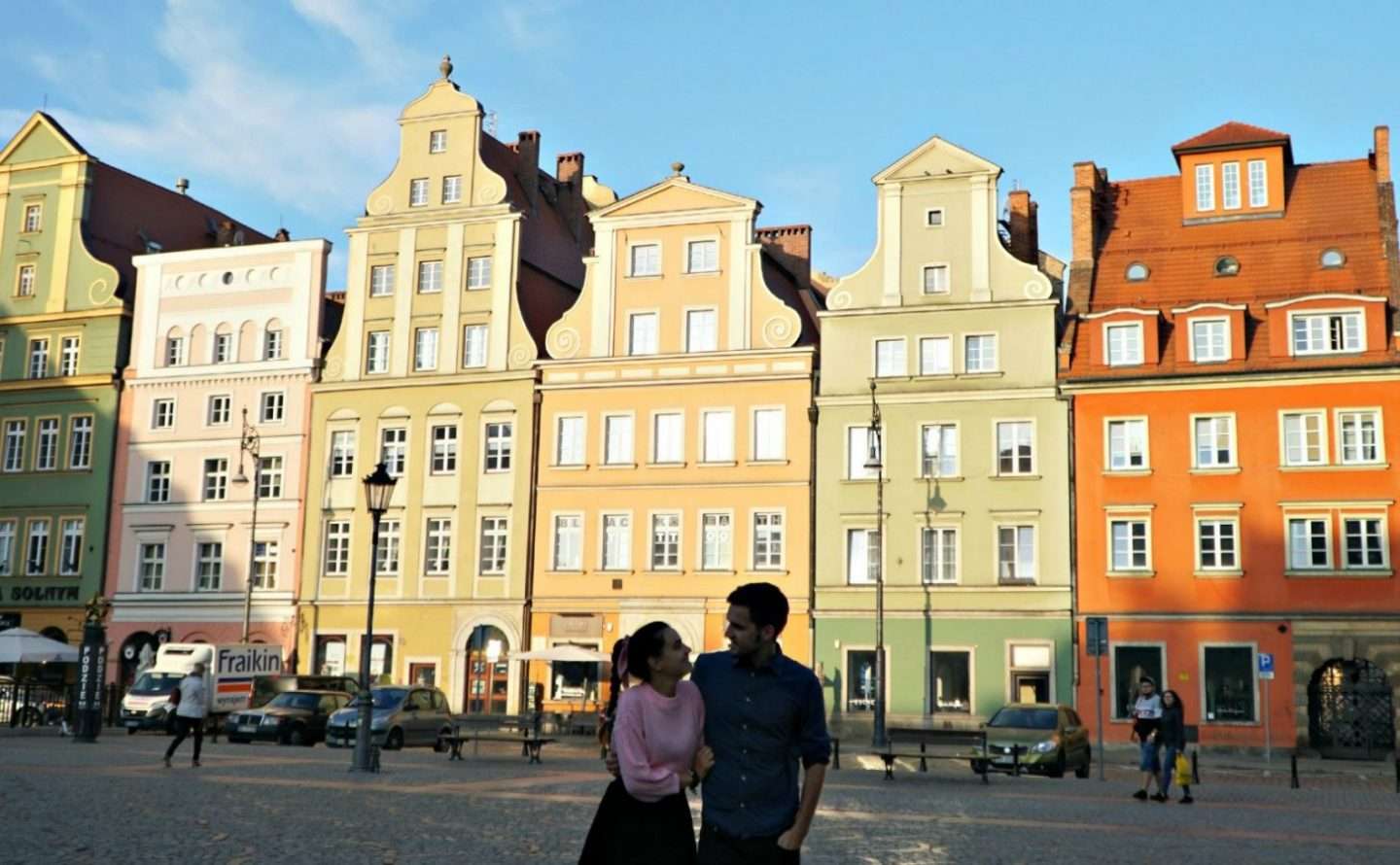 Wroclaw is a city in southwestern Poland and the capital of Silesia region. It lies on the banks of river Oder and is the 4th biggest city in the country with about 600,000 inhabitants.
It is an important University hub and has been growing significantly as a tourist destination in the last few years.
We included it in our recent Interrail trip through Europe, during which we also visited the Polish city of Krakow.

We’ve decided to put together an itinerary of the best things to do in Wroclaw. The itinerary can be followed starting from any point and can be divided into two or more areas depending how much time you have at your disposal.
All points of interest included in the route can be reached on foot, whilst we suggest to take a tram or bus ride to get to the ones outside the inner city boundary (marked by the moat and river Oder branches).

The Panorama Raclawicka is famous for being the oldest preserved painting of its genre in Poland. It’s an impressive 15 x 114 meters cycloramic painting depicting the Battle of Racławice.
A cyclorama is a panoramic image on the inside of a cylindrical platform. Due to its dimensions, the Panorama Raclawicka is exhibited within its own circular building.
The viewer has to stand in the center to appreciate the various viewing angles and understand the techniques used to create unique perspective and effects that give a feeling of reality.

The National Museum in Wroclaw is one of many branches of Polish National Museums in the country. It holds a large collection of contemporary art.
Besides the collection itself and the interior of the museum, the exterior is worth a view too, covered in foliage alongside the whole building.
Admission to the gallery is free on Saturdays.

The neighbourhood called Cathedral Island on the northern bank of the Oder was the first settlement in Wroclaw.
Originally, a branch of the river used to encircle the area into an island, and for this reason when the Cathderal of St. John the Baptist was built, the quarter became known as Cathedral Island.
Over the centuries the church has been rebuilt at least 4 times, and it features Neo-Gothic and Renaissance elements upon the original Brick Gothic syle.

You can cross the Tumski Bridge (or Bridge of Locks for its thousands of locks) to walk the only street running through tiny Wyspa Piasek (Sand Island) and head back to the old town of Wroclaw via Piaskowy Bridge.
(Tumski Bridge was under renovation in November 2019, it should be open again by 2020)

The Wroclaw Market Hall is the traditional market of Wroclaw. Whereas the internal concrete pillars make the building more appealing on the outside, the inside has many nice surprises, from meat and sausages vendors, to a typical Polish milk bar.
Come here to get some fresh supplies for your walking tour. An onsite money exchange is available, most stalls accept Zloty cash only.

Along the Oder riverside lies Wroclaw University, a proper institution for the city. As many as 9 of its students went on to win the Nobel Prize.
The exquisite architecture of the University buildings is a bliss to the eye.
Not far from Wroclaw University, the Ossolineum is an historic library and cultural centre, with a fine inner courtyard decorated with ivy.

Carrying on southwards you will finally reach Rynek, the main Market Square of Wroclaw. Rynek is a large rectangular medieval square, roughly 210 x 180 metres, entirely pedestrian.
Two city halls occupy part of the square, the Old Town Hall and the New one. Rynek represents the very heart of Wroclaw, standing at the junction of 11 streets.
Arguably the most photographed houses in the city, the colourful buildings on all the four sides of the Market Square are of undeniable beauty. Their styles vary from Flemish to Baroque, from Rococo to Liberty, and each one of them has its own peculiarity.

The contiguous smaller squares of Salt Market at the southwestern corner and St.Elisabeth’s Church at the northwestern corner are seemingly gorgeous too, although a bit in the shadow of the Main Square.
Salt Market was the place were salt coming from Wieliczka Salt Mine (near Krakow) was traded. Today it is known for its rainbow colored flower stalls.
The two little Gothic houses halfway between St.Elisabeth’s Church square and Rynek are the only remaining around where the old church cemetery used to be. They are joined by an arch and are popularly known as Jaś i Małgosia, Polish names for the famous Hansel and Gretel fairy tale characters (hence Hansel&Gretel houses).

Another thing that makes Wroclaw renowned for are its Dwarfs, small bronze statues spread across town. Since emerging in 2005 they became very popular.
Estimates count more than 130 statues and totally up to 350 dwarfs! We can’t list them all in our itinerary here but luckily there are online maps to help find them, and they even sell maps around the city.

Continuing with our itinerary, the White Stork Synagogue is the only synagogue in Wrocław to have survived the Holocaust.
After being abandoned and left in ruins during the Polish communist government’s anti-Zionist campaign in the 60’s, it came back to life in the 90’s with the fall of Communism. Works lasted over 10 years and the building was officially restored in 2010.
The White Stork Synagogue is now the Center for Jewish Culture and Education in Wroclaw.

The Old Town boundaries are defined by the ancient city moat. Strolling by the green areas along the moat allows views on some landmarks as the National Forum of Music, Wroclaw Opera House, Park Staromiejski, all the way back to the starting point of our itinerary, the Panorama Raclawica.

A couple more places outside the inner city are worth a mention.
The dwarfs aren’t the only famous statues in Wroclaw; the group of 14 lifelike people statues sinking into the ground known as “The Monument of the Anonymous Passers-by” is a captivating sculpture representing the period of martial law in Communist Poland. It consists in 7 statues disappearing into the sidewalk of Swidnicka Street, and other 7 reemerging on the opposite side.
This monument functions as a memorial to those who went missing and were murdered in the 80’s, when martial law in Communist Poland was active for some years.

Located to the east of the city but easily reached by tram, the Centennial Hall (Hala Stulecia in Polish) was designed by German architect M.Berg when Wroclaw was under the German Empire.
A large hall dominated by a massive cupola, it still serves today as a multifunctional structure to host events, concerts and exhibitions.

If you are in Wroclaw during warm months from May to October, don’t miss the animated water shows at the Multimedia Fountain, situated in front of the Centennial Hall.
300 nozzles create a water spectacle accompanied by music and light. The show happens every hour, come at night for a more enjoyable experience.
During Winter, part of the fountain park is used as an ice-staking rink.

Following under you can find useful info to make the most out of your stay in Wroclaw.
We hope you found this itinerary guide useful and wish you a great trip to Poland!

READ ALSO:
5 places to visit in Krakow, Poland
What to see in Dresden, Germany

WHERE TO STAY IN WROCLAW?