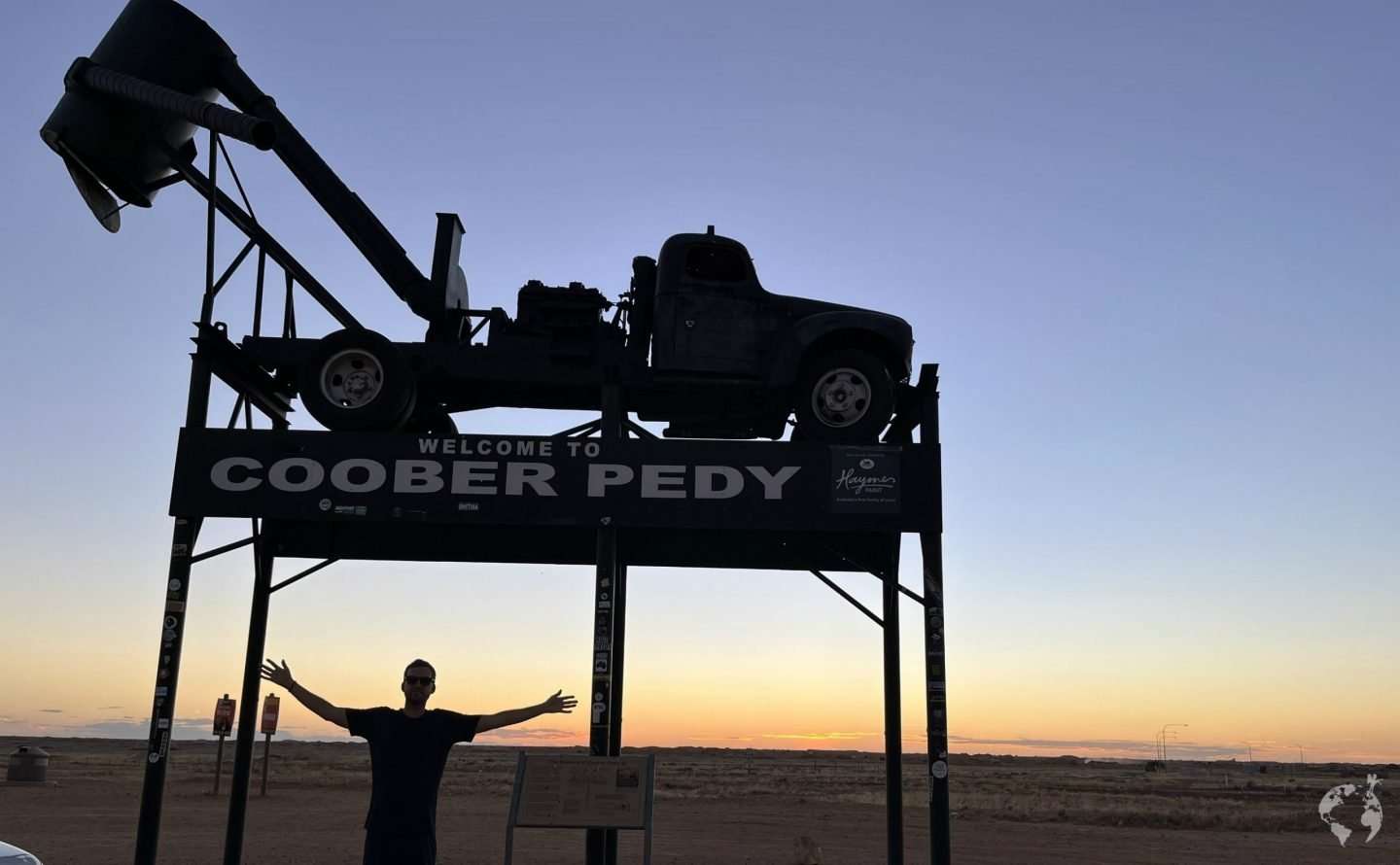 The question is: why would you live underground and what’s there to see in Coober Pedy, in the middle of the outback in South Australia?? Let’s try to answer that and give you a reason to travel to one of the craziest places we’ve ever seen!

WHERE IS COOBER PEDY?

First things first, let’s find on the map the whereabouts of this quirky town.
Coober Pedy is located in the state of South Australia, some 850 km north to its capital city Adelaide and 700 km south of Alice Springs. Around here, the blazing sunrays and scorching heat of the outback are unforgiving. Temperature often reach 40°C in summer (the official high record is 47.8°C), rain is a rare occurrence.
There’s basically nothing for hundreds of kilometres around Coober Pedy. Or we should say, there’s nothing on the surface…

Recent history began in 1915, when the first precious opal stone was discovered. Few years later, swarms of miners had already moved into town and the city of Coober Pedy was officially founded in 1920. The origin of the name is quite funny, it’s said that local aboriginals used to call the area kupa-piti, which translates to “white man holes”! Today’s nickname is Opal City, as the big sign along the highway reads.

Here everything rotates around the opal deposits, a rare mineral known for its green-bluish veins.
97% of its global production is within Australia, reason why it’s considered the national gemstone. Opal is measured in carats, and can be worth up to 10,000$ a carat in its most precious variants. It’s easy to see why so many men moved here over the decades, coming from every corner of the world.

Local population ranges between 1000 and 2000 permanent residents depending on seasons, miners come and go regularly. Over 50 nationalities are represented in town, mostly from Greece, ex Jugoslavia, Italy. And yes, we found an Italian Club in Coober Pedy too! One night we went there for a drink and met several old immigrants, who spent a lifetime working in the mines and decided to stay even as retirees.

Nowadays a licence is required to dig and look for opals. Around Coober Pedy there are thousands of empty holes, which are dug out with the typical local machine, the blower truck. When a trace of opal is found in one these holes, it’s necessary to continue by hand digging in order not to ruin the gemstone.

To escape the suffocating heat, locals came up with an efficient building technique. Houses are dug along the hill sides, creating effectively an underground home. This way the temperature inside stays constantly around 20°C with no need of air conditioning, day or night, summer or winter (winter nights in the desert can be as cold as 5°C).

Usually the entrance is along the street whilst the rest of the house spreads underground. Everyone tries to stay underground as much as they can to avoid the heat, otherwise they drive in a car with AC. It’s uncommon to see people walking around during hot days. Aboriginals only seem to be more used to heat (and flies), other than ourselves who inexpertly opted for a midday stroll along the main street… In Coober Pedy we saw not only quirky underground houses, but churches, shops, hotels and museums too.

Indeed there’s plenty of hotels and accommodation for a town in the middle of nowhere. Tourism has developped in the past couple decades, particularly after the opening of the new Stuart Highway. The highway connects central Australia north to south, from Darwin to Adelaide, going through Alice Springs and Coober Pedy. Almost 3,000 kilometres of sealed highway, once unsealed, have been completed not long ago in 1987, as a proof of how hard it is to cross such remote and inhospitable areas even in modern times.

Coober Pedy is now more accessible from Adelaide, but also a vital stopover for those travelling on-the-road towards mythical Uluru or Alice Springs, and by now it’s become a must-see place for every traveller like us looking for the authentic Australian outback experience.

Here’s what to see in Coober Pedy. Among things historical, absurd, unthinkable and meaningless, you’ll definitely be entertained:

HOW LONG TO STAY IN COOBER PEDY?

As you can tell there’s plenty to do and see in Coober Pedy, considering it’s a small town in the desert. We even went there twice in a month! To be honest the second time was more a necessity than a choice, being it one of the very few populated areas where we camped both on our way out and back from our Melbourne to Alice Springs road trip.

We stayed in Coober Pedy for 3 nights, arriving exhausted late at night after driving almost 2,000 km straight from Melbourne in two days (like driving from Italy to Russia…).
We used one day to visit the crazy attractions in town, and the next to go and see the sunrise and sunset colours over the amazing scenery at The Breakaways. Probably a full day or two half days are enough to visit Coober Pedy.

Our guide to Coober Pedy ends here. We hope we intrigued you enough to convince you to drive for thousands of kilometres to reach this crazy and unique place in the world!

HOTEL – WHERE TO STAY IN COOBER PEDY

You can book all your accommodation in Coober Pedy and in Australia with free cancellation here.

HOW TO REACH COOBER PEDY

WEATHER & SEASONS – WHEN TO GO TO COOBER PEDY

The climate is extreme in Coober Pedy. During summer months (nov-mar) the heat is unbearable, as sticky flies are. As a reward for your audacity, there will be very few tourists around and your outback experience will be even more real. Whereas in winter (may-sep) the temperature hovers around 25°C, with cold nights below 10°C. This is peak season, you should expect sold outs and even queues, thus remember to book your accommodation in advance.

Never leave home without a reliable travel insurance. Better safe than sorry.
We recommend two options for you to compare.
Get a quote with Worldnomads here, and get 10% off your travel insurance with Heymondo here.