Chiang Rai is the first stop of our journey in Thailand that will see us going from North to South, ending in Bangkok.

Chiang Rai is a little quiet city with a few attractions. Some people prefer it to Chiang Mai because it’s smaller and less crowded, but still you can go and do the same typical activities and excursions in the area around like visiting several temples, see the elephants, jungle treks, etc.. We decided to spend more time in Chiang Mai, so we’ll stay just one day here.

Last night we walked through the night bazaar and had dinner close to the beautiful Clock Tower, today we are visiting the debated Wat Rong Khun, better known as the White Temple. We catch the local bus at the market and get there in about half an hour. 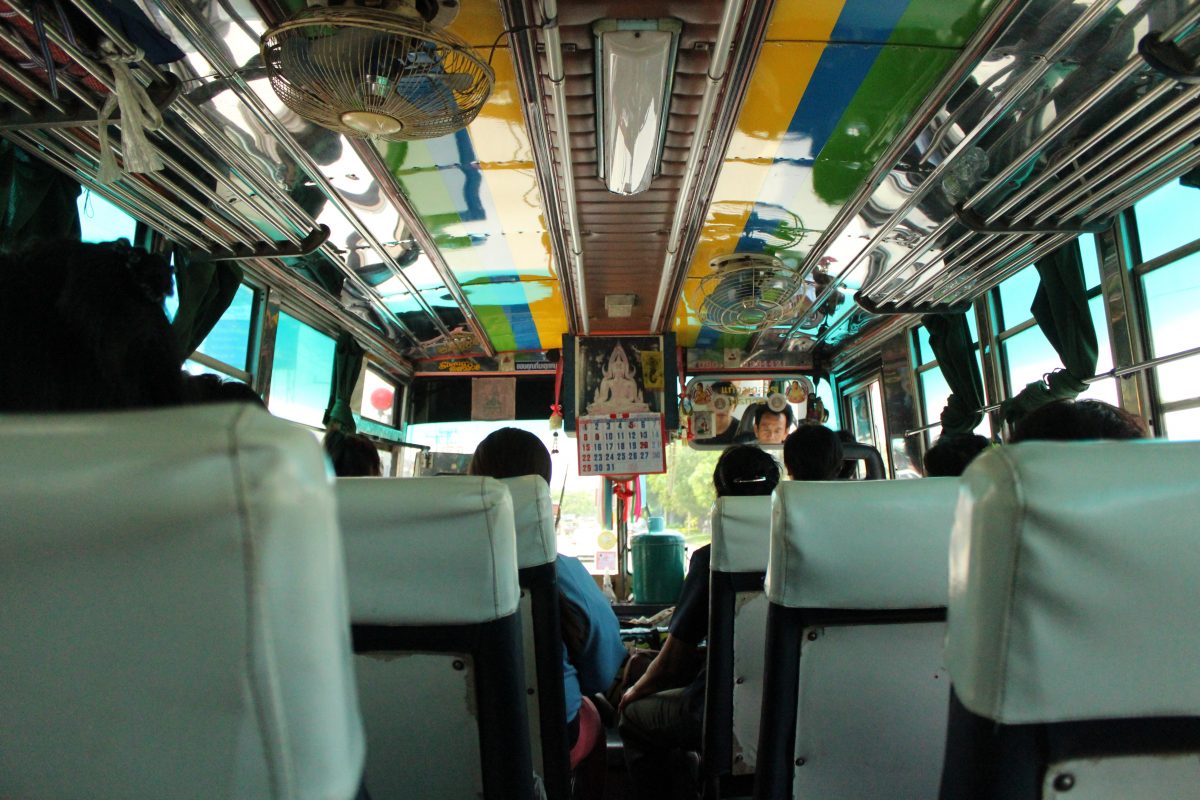 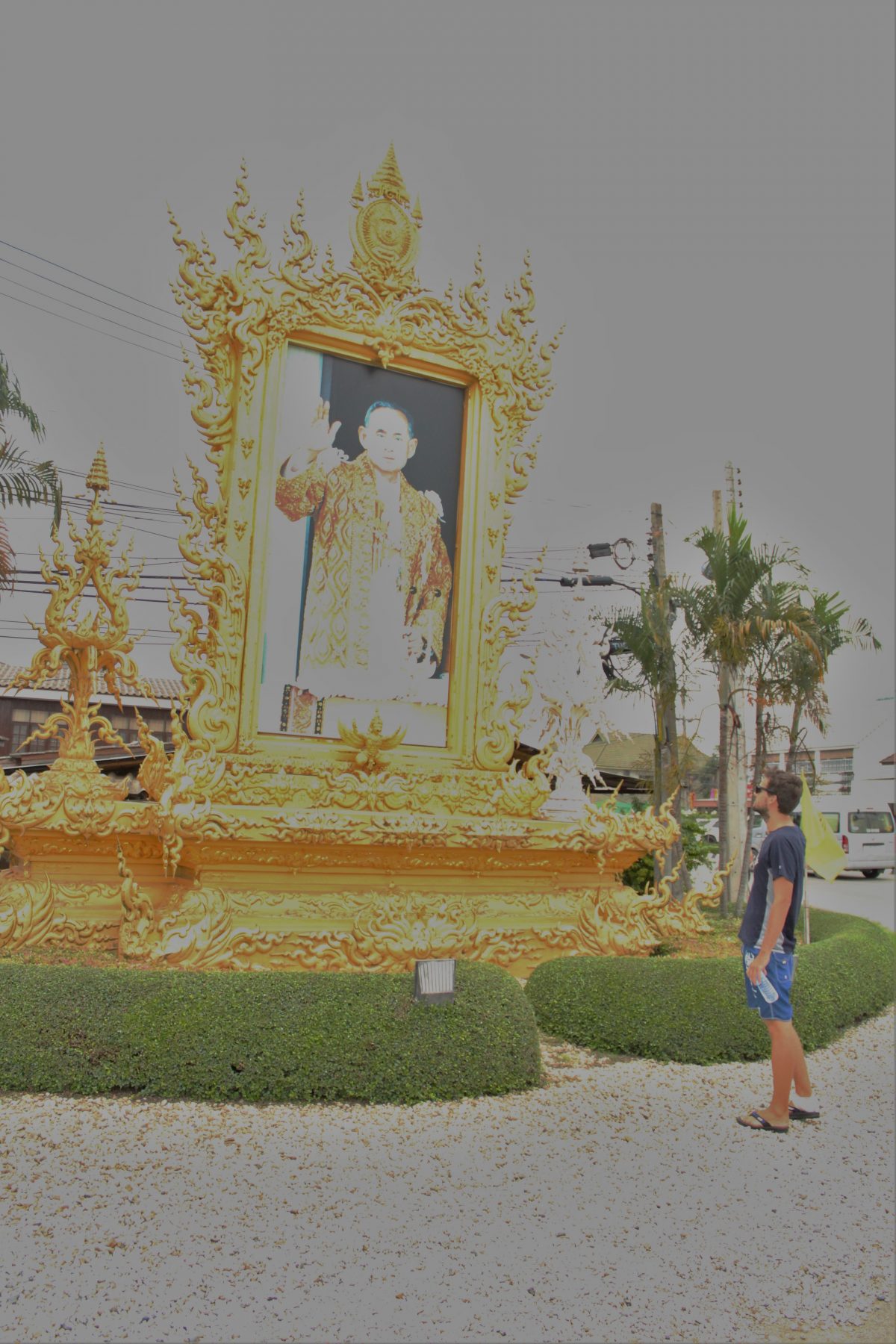 The discussion about this piece of architecture concerns the fact that it’s been built only for tourism purposes, forgetting that it should be a place of prayer. It was originally a temple but was falling in bad conditions. A local artist offered to rebuild it with his own funds, according he would use his style: the result is way more an art exhibit than a temple. For us as tourists, we just love it: as soon as we see it we are impressed, all that white is stunning, seems to be in a different world, like in a fairytale. 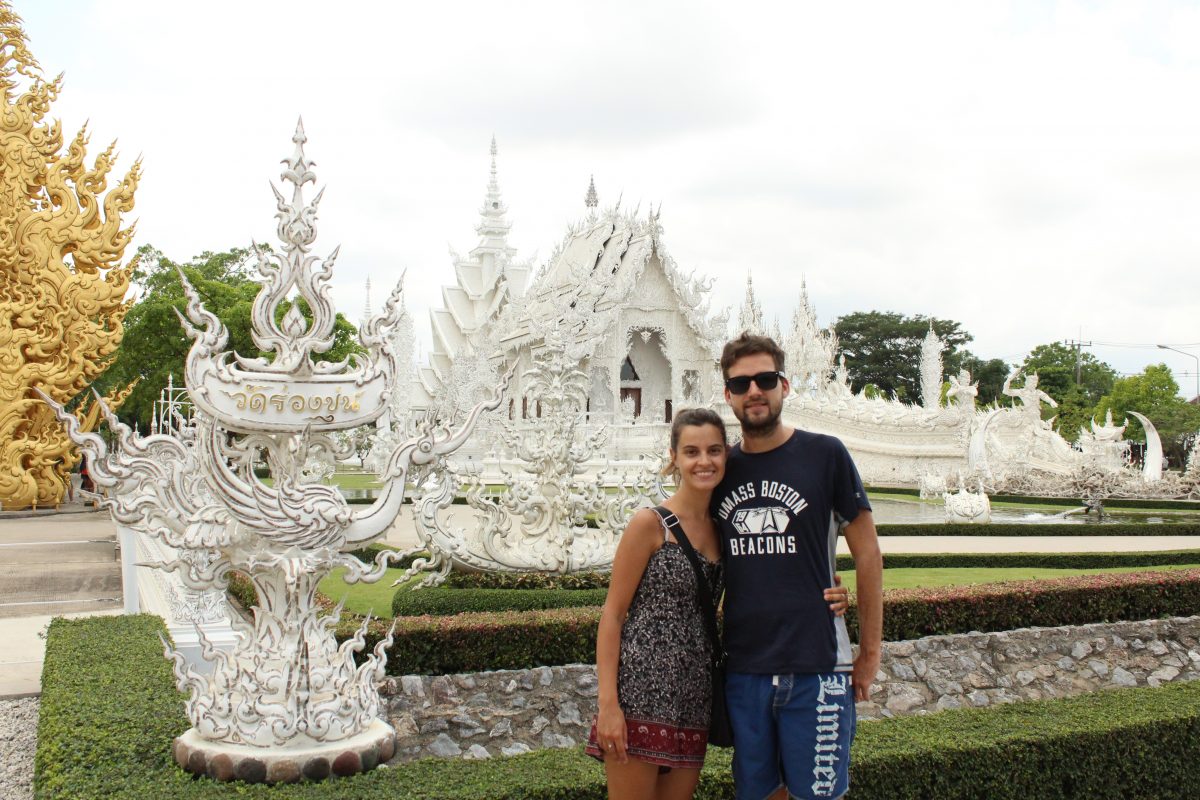 Access is free, donations are free as well, we walk around the site for an hour or so, around the main temple rise all white buildings, and many other are under construction.

The inside of Wat Rong Khun is even more controversial than the astonishing white outside: absurd scenes are painted on the walls, such as: Batman and Superman flying around skyscrapers, the Twin Towers being hit by the infamous planes, Yoda, Jar-Jar, Obi One Kenobi and all the other Star Wars characters with their lightsabers here and there…what the heck is going on here!? Sorry no proofs for you, unfortunately photographs are not allowed inside, but still you have to take off your shoes to enter the holy room… 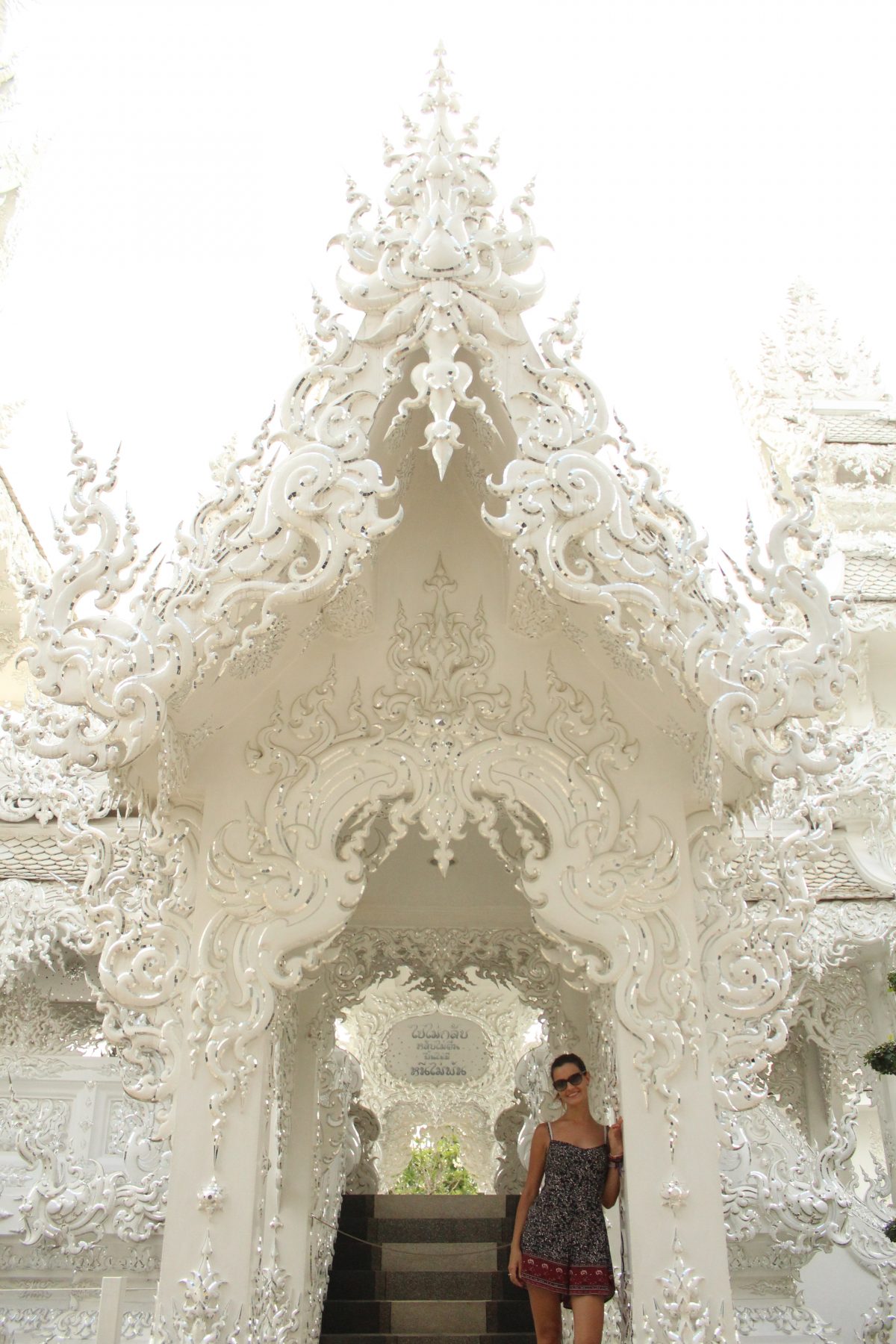 We leave the place at 3 pm, we hop on a tuk-tuk just in time before a huge storm hits the area (we literally see a wall of rain running in our direction!). Back at the bus station unfortunately most buses are already sold out, we have to wait and get the tickets for the first bus available at 7 pm. Had we known, we would have booked online before: follow this link to secure your ticket from Chiang Rai to Chiang Mai.

At 10 we arrive in Chiang Mai, we walk with our tiny backpacks on past the Night Bazaar which is 10 times bigger than in Chiang Rai, and get to our Dutch Guest House, which Edo chose immediately with pride. The owner, Harry, greets us shirt-less, belly out, beer in his hand: what a man. The guesthouse is cosy, a beautiful common area with pool table and darts, awesome Thai and Dutch food. We will spend 4 nights here. 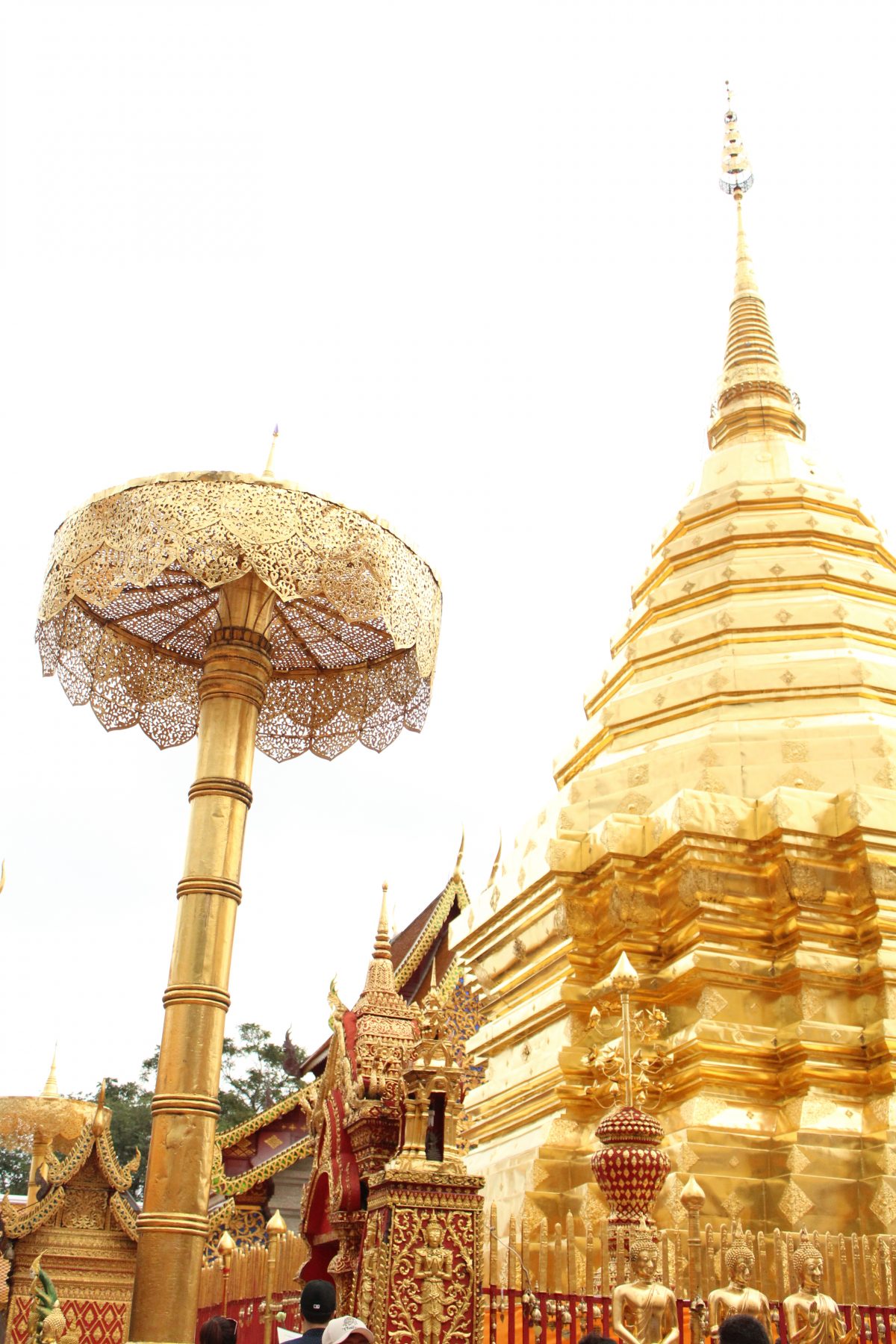 The day after we rent a scooter from Harry and head to Wat Phra That Doi Suthep, which is not an insult but a complex of temples, pagodas and shrines 15 km away from the city, rising on the sides of Mount Suthep. This wat is both influenced by Buddhism and Hinduism, there are an Emerald Buddha and a statue of Ganesh too, the Hindu God. It’s a charming and peaceful place, a lot of devoted come here to pray, as usual an appropriate dresscode is required. And also we can appreciate a great landscape view on Chiang Mai. 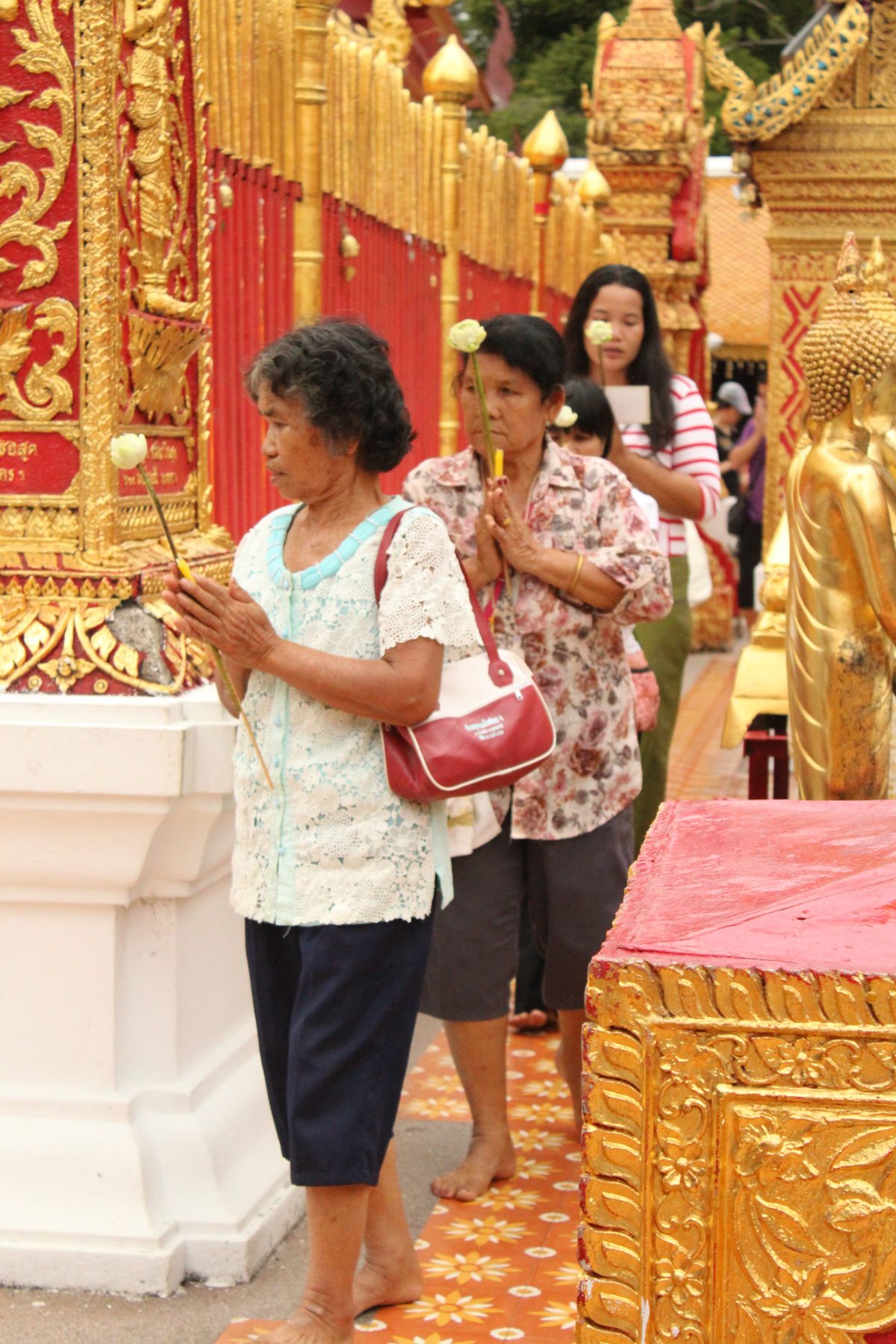 At night, we hit the bazaar, hungry for food and souvenirs: the choice is endless for both, it’s hard to resist to the colourful and original products everywhere. We start to feel a big difference from the Vietnamese and Laotian habits, here McDonald’s and Starbucks pop numerously. The less civilized and more wild times are already behind us. In Thailand, mass tourism has started decades before, as a consequence everything is set up for us westerns. You can still do a lot of authentic activities during the day, and then at night relax in your hotel’s swimming pool.

Tomorrow we will try to escape reality again and go in the jungle to see the elephants, and Ambra is on fire!

Click the link below NEXT POST >> at the end of this page to read our article about Chang Mai! 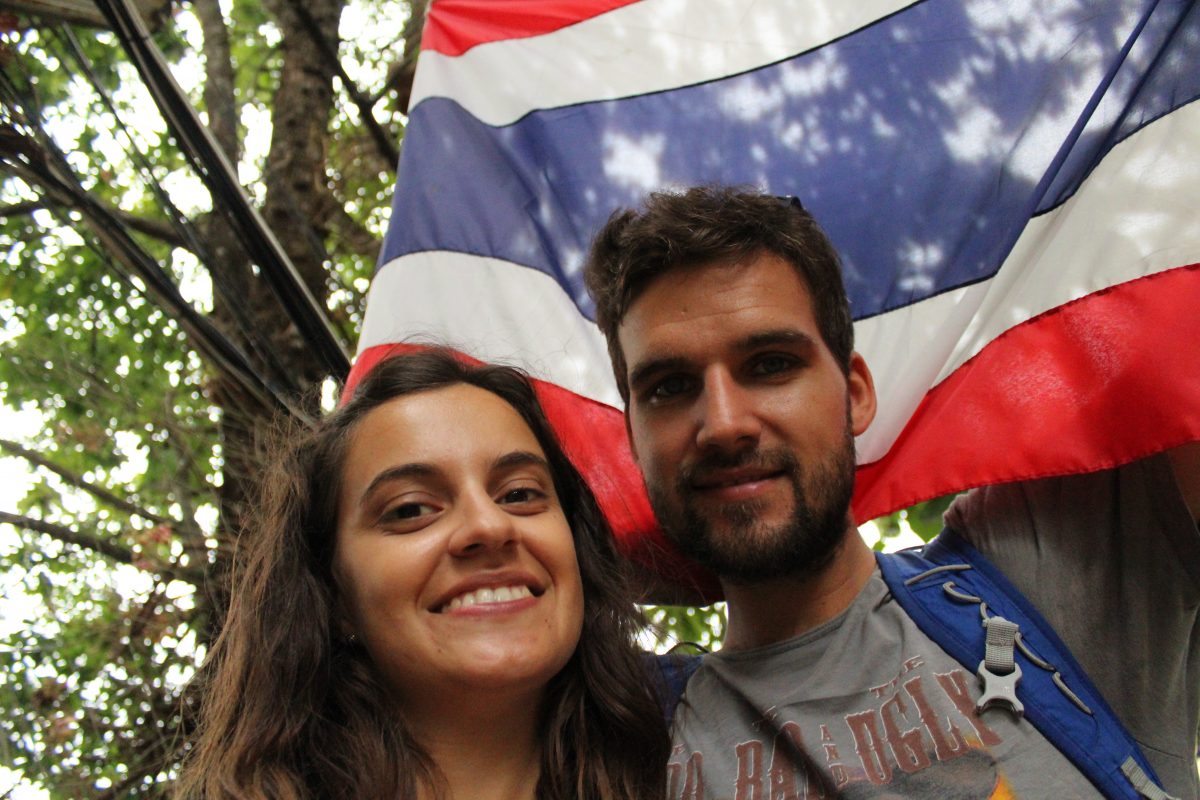