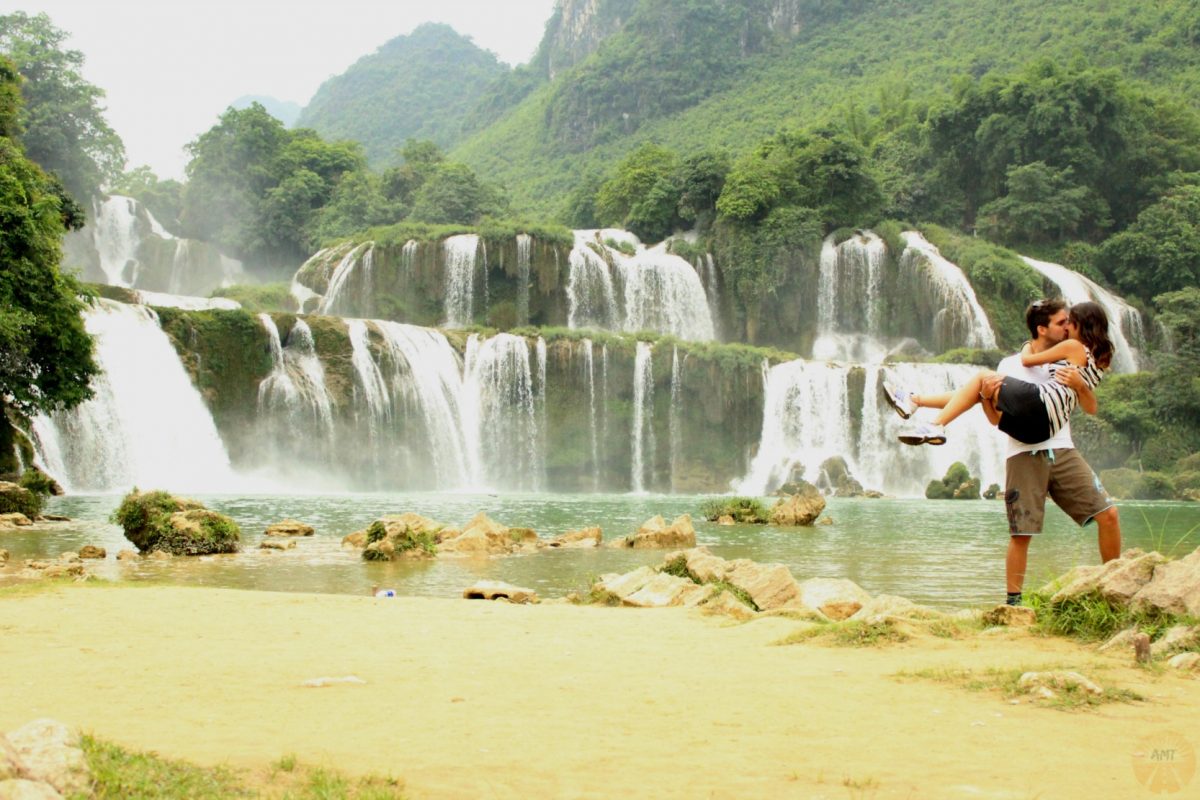 We are currently travelling by bus and motorbike in the north of Vietnam and today we explore the northeastern province of Cao Bang, with Ban Gioc-Detian Waterfalls as final destination on the border with China.

We just left charming Hanoi and are heading north now. After an unusual night on the sleeper bus from Hanoi, we step off at Cao Bang bus station at dawn, 5.30 am.
Sleeper buses from Hanoi leave every night after 9.30 pm from My Dinh bus station, and reach Cao Bang about 6-7 hours later. Still half asleep, we walk through locals who press us asking where we want to go, and we sneak away quickly.

Cao Bang is a small town with about 50,000 inhabitants, facing the Bang Giang river. We cross the Vietnamese and socialists red-flag-decorated bridge and we head to the main road. Hotels and guesthouses are numerous for an isolated place like this, so after a few attempts we settle in a room on the ninth floor with riverview for 250,000 Vietnamese Dong, the equivalent of 10 US dollars!

They let us check-in super early at 7 am so we can get a few hours of rest, the sleeper bus isn’t really the best way to get a good night’s sleep.

When we wake up, we rent a motorcycle (for 200,000 VND, almost double the price compared to Da Nang) and leave eastbound towards Ban Gioc Waterfalls. The road is in good conditions, many twists and turns at first, with long straight roads after. Plus some rewarding views! 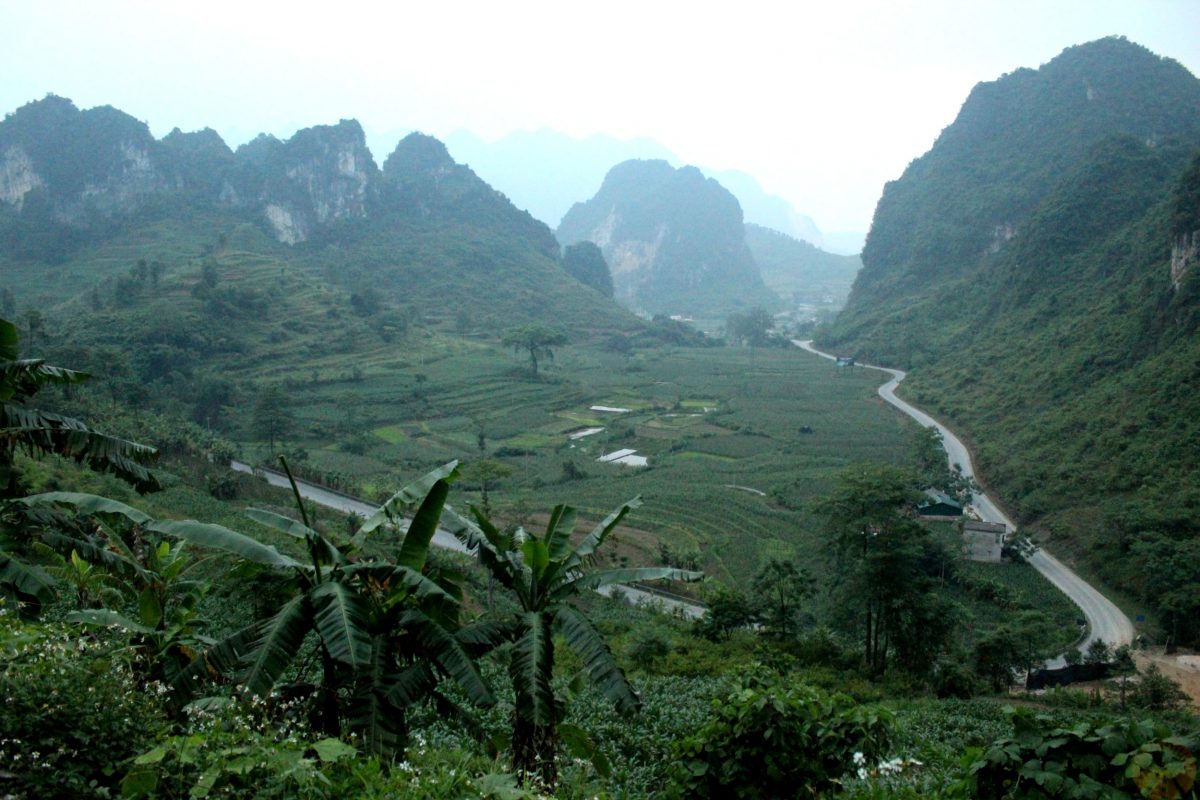 A road with a view!

At noon we get to Ban Gioc Waterfalls, that reveal to us suddenly after a bend, with the Chinese border just a bunch of km away.

Ban Gioc Waterfalls are in fact so wide they have a side diving into Vietnam, and the other into China. The fall is “only” 30 meters high, what is impressive is the overall width that reaches 300 meters! 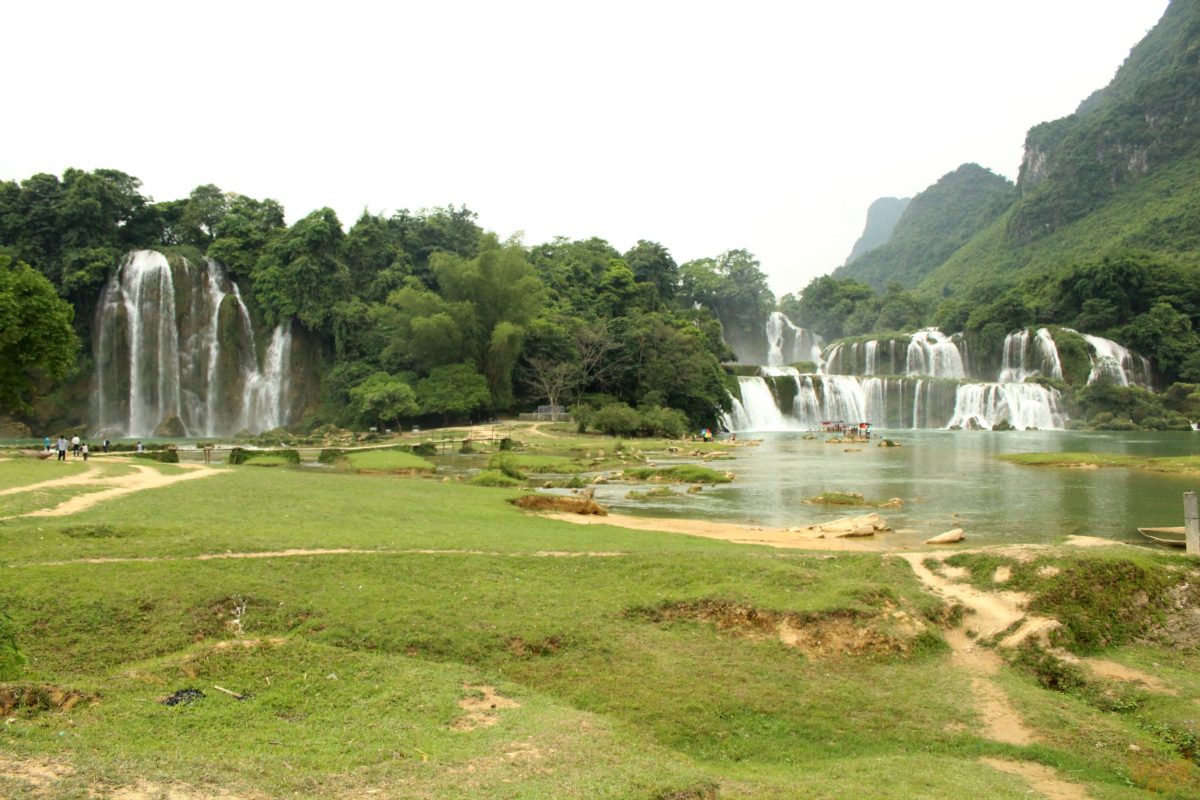 On the Vietnamese side there’s relaxation and laziness, some stands sell souvenirs, but their owners lie on hammocks. Whereas the Chinese shore is super busy, rafts go up and down to bring tourists closer to the falls. This goes to describe the different organisation and mentality between the two countries in tourist matters, Chinese do it better in this case.

Indeed, as on the Chinese side a wooden stairway leads to the top of the falls to appreciate them from above too, on our side the muddy and forgotten uphill path is blocked by an iron fence. Still we look at the bright side and make the most of the Ban Gioc waterfalls, being almost by ourselves here!

Later on, after stepping unofficially into China according to our GPS (the border check is further on, some women cross clandestinely the river…), we make our way to the Nguom Ngao caves. The road leading to the entrance is not well indicated, it’s just a side dirt road at the moment.
We won’t be surprised to be the only visitors (we’ll only meet two local people), we won’t complain about that! Actually a couple of dredges were busy doing some works to improve the 3-4 km-long road that brings to the caves, so surely it will be more crowded in the future.

We get into the caves at about 2 pm, and we’ll get out almost two hours later! A breathtaking scenery that leaves us speechless, hard to describe. Stalagmites and stalactites of huge dimensions, of all shapes, continuously evolving. Water is everywhere, the drops that form the stalagmites come down as pouring rain, we hear the underground rivers flowing all around. Speleologists have discovered that the grottoes are linked with the Ban Gioc waterfalls 4 km away, but these recently discovered caves aren’t open to public just yet… 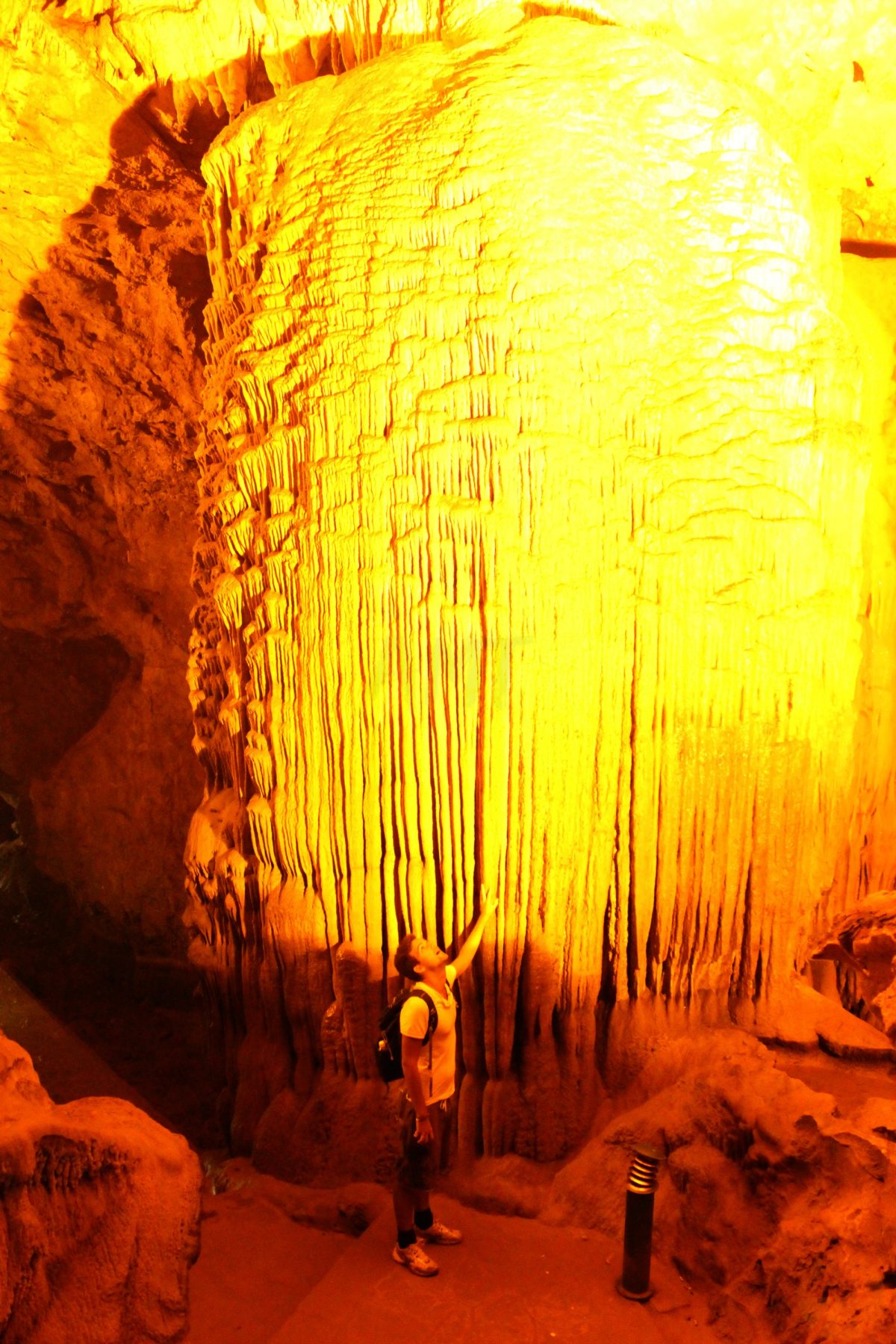 We have been to few caves in Vietnam, including Da Nang’s Marble Mountains to Ha Long Bay’s Thien Canh Son Cave, (unfortunately we missed Phòng Nha in central Vietnam) but these ones have been undoubtedly the most impressive. Surely the fact we were alone with no people around had deep impact. As usual, photos can describe better than words, so check them out and try to picture the feeling being there, just 100 times better than in photo! 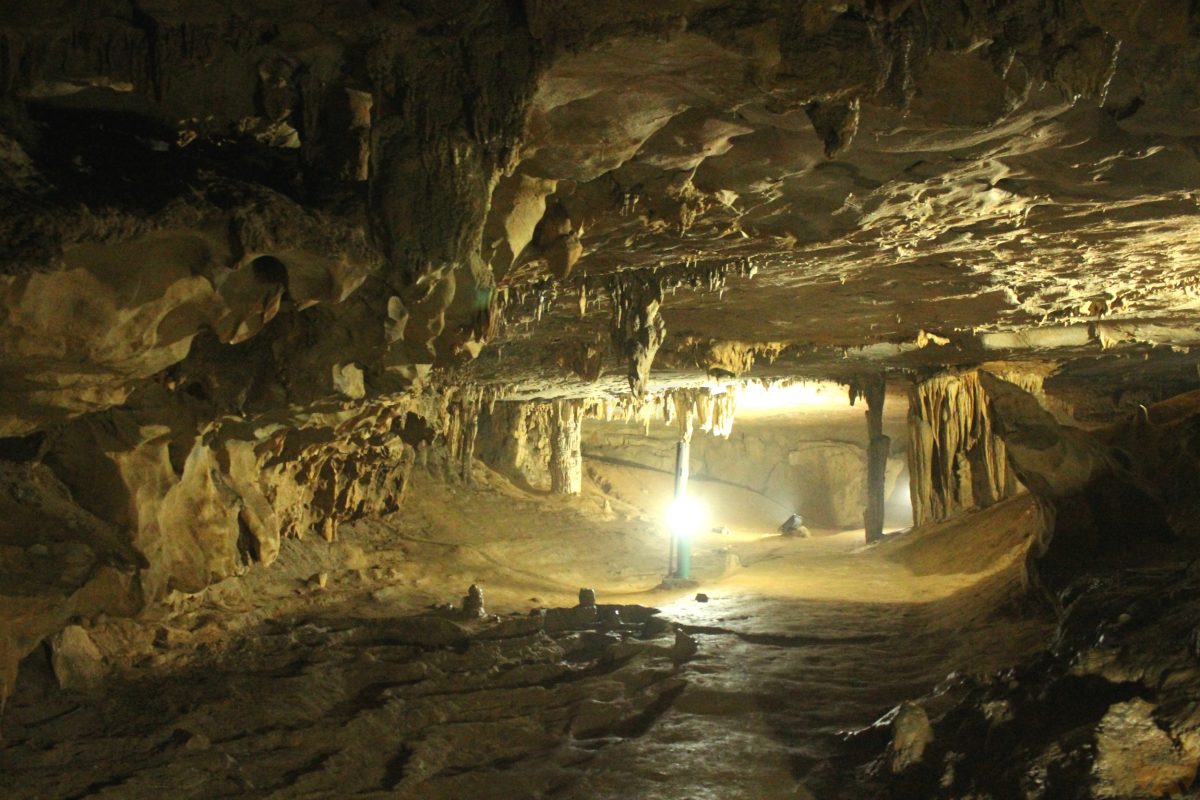 We have to leave around 4 pm, in order to get back to Cao Bang in time to avoid riding in the darkness, an experience that would be better not to try, but will happen to us later on in Ha Giang province…
We have a nice bbq dinner close to our hotel and get to bed early, tomorrow another adventure on-the-road to Ha Giang awaits us!
ALSO READ:
Cao Bang to Ha Giang by minibus
The best 8 temples in Ayutthaya, Thailand

HOW TO GET AROUND: