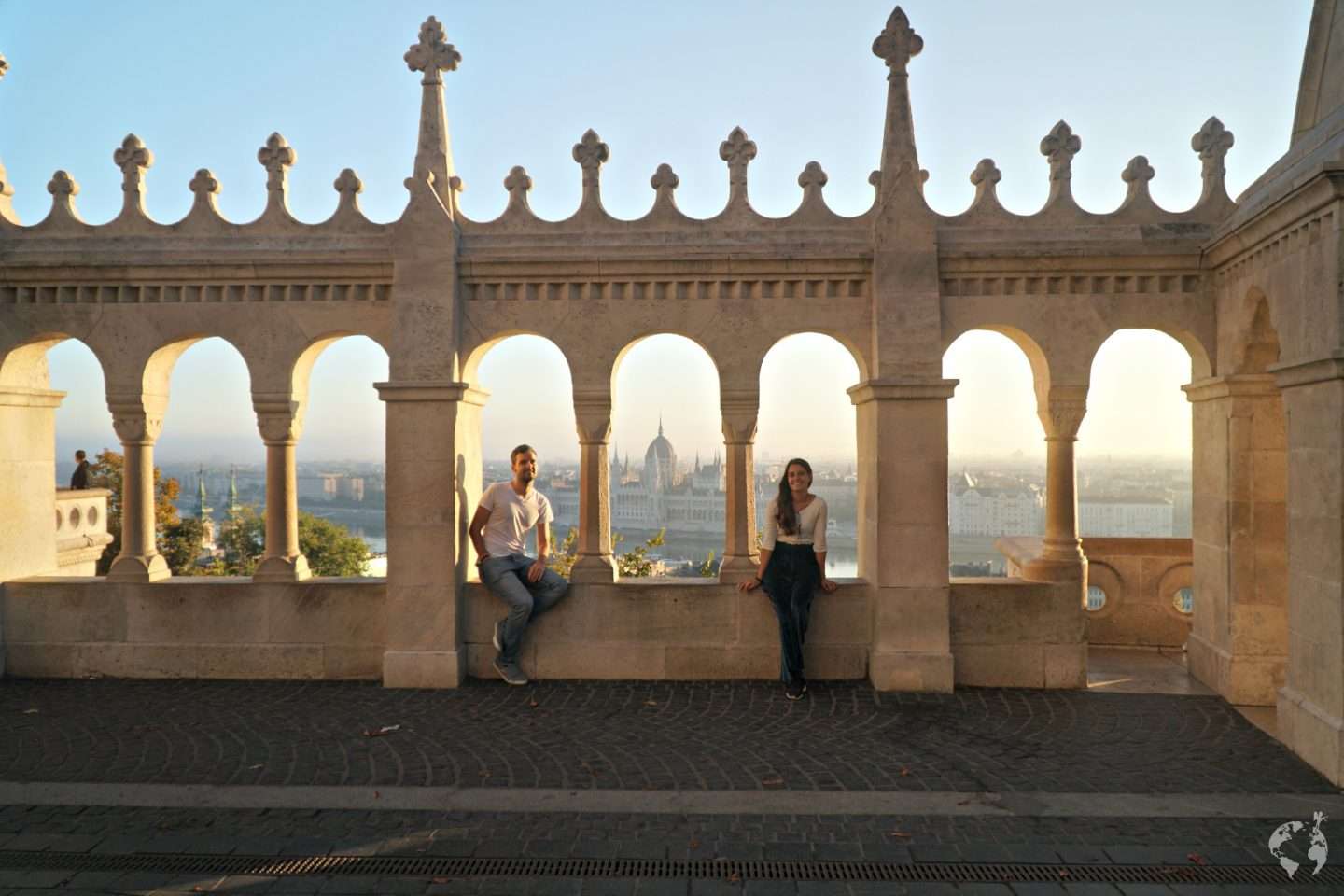 If there is one thing we’d heard of Budapest before getting there, it surely is about its famous thermal baths. We finally had the chance to go and see ourselves what the hype is all about.
Situated along the Danube River as Vienna and Bratislava, Budapest is the result of the merging of two cities: Buda and Pest.
Buda rises on the West bank of the Danube, a hilly and more residential area. On the East of the river is Pest, where most of the city’s infrastructures, shops, restaurants and tourists can be found.

WHAT TO SEE IN BUDAPEST

Budapest is full of attractions and things to do, we’d recommend to stay at least 3 nights, but even four or five would be ideal to make the most out of your trip.
For ease of consultation, we’ll list the best points of interest on each side of the Danube.

We start with Pest, where our hotel is located. Staying here was ideal for us because we could walk to most of the attractions.
This said, the public transports in Budapest are very well organised. We took the bus and the metro a couple of times, besides trams run widely on both banks of the Danube and there are three main train stations reaching the inner city.

Budapest Central Market Hall is located close to the Danube, some 100 meters from Liberty Bridge. It is worth a visit just to see the dozens of salami and cold cuts stalls, plus the usual fruit, veggies and fish sellers.
It is possible to have some food on the upper floor of the market, although we found it to be more of a tourist thing rather than a local habit.

The fact of being the largest synagogue in Europe and second in the world after the one in Jerusalem, makes of Dohány Street Synagogue a must place to see. The synagogue has a huge seating capacity of 3,000! Interesting guided tours divided by language (English, French, Spanish, Italian, German, Russian and Hebrew) will take you inside and explain how and why this Moorish Revival style synagogue was built in 1859.
The large Jewish community of Budapest, tired to be oppressed by the Christians, decided to build an edifice that would resemble a church from outside instead of a synagogue. Besides, they also stopped wearing payot (twisted sidelocks), long beards, and traditional Jewish clothes as the kippah hat, in order to try and be more accepted by the Christians. Not everybody agreed on this change and roughly 20% of Budapest Jews are still Orthodox Jews today.

JEWISH QUARTER AND MEMORIALS IN BUDAPEST

The most touching part is the cemetery. During WWII, Dohany Street Synagogue was enclosed in the Jewish Ghetto.
As many as 70,000 Jews were kept prisoners in the ghetto in appalling conditions. When Russians liberated Budapest, almost 10,000 people had died. The bodies were so many that it is estimated that 2,000 people had to be buried in the makeshift synagogue cemetery.
A Holocaust Memorial depicting a weeping willow with names and tattoo numbers of those who died was later erected on site in their memory.
Another notable WWII memorial in Budapest is “The Shoes on the Danube Bank”, that can be found a few hundred meters from the Parliament, which honours the Jews who were killed by Hungarian fascists.

St. Stephen’s Basilica is a beautiful Roman-Catholic basilica in the heart of Pest. Named after Stephen the First King of Hungary, it reaches 96 meters of height with its two bell towers.
Interestingly, it has the same height as the Budapest Parliament, which was done on purpose to give the same importance to spiritual and worldly things in the city. Also, Budapest regulations forbid the construction of any building taller than 96 meters.
A large square lies before the basilica, and the walking Zrinyi street runs straight in front of it .

Perhaps the most famous building of Budapest, the Parliament is an architectural masterpiece by Imre Steindl, who won the international competition set up to design the new House of the Nation.
After the unification of Buda, Obuda and Pest into one city in 1873, it was decided that the new Parliament would rise along the river. Construction began in 1885 and ended in 1904.
As for the Synagogue, tours in different languages are available and it is not possible to visit on your own. The tour lasts about 45 minutes and has a cost of 3200 HUF Hungarian Forint, about 10€. (20€ for non-EU visitors). We recommend to book online here a few days in advance to choose your preferred time of visit (tickets can be collected on premises providing your e-receipt).

The interiors of the Parliament are truly gorgeous. In particular the dome room where the Holy Crown of Hungary is kept and guarded, that can be seen but not photographed by tourists. Do take your time to walk around the building from outside too, and admire it from different angles.

Several bridges cross the wide Danube River. The most central ones are Liberty Bridge, Elisabeth Bridge and Szechenyi Chain Bridge.
Being close to it, we particularly liked Liberty Bridge, where it’s even possible to sit on its large iron railings, and enjoy an aperitif on-the-go while waiting for sunset.

Where there’s a river there will always be boats, and the Danube is large enough to have plenty of them. There are cruises of any type and price in Budapest, starting from 10€, ranging from sightseeing to dinner and party cruises too. All of them allow to enjoy the so called Pearl of the Danube, some also include a scheduled stop at Margaret Island, to have a walk around.

To be more specific and fair to history, it is necessary to say that the 1873 creation of the new city of Budapest is the result of the unification of 3 cities and not 2.
The previous towns that formed Budapest were as a matter of fact Buda, Obuda and Pest. Obuda (literally Old Buda in Hungarian) is sometimes omitted being itself the old part of Buda.
Buda and Obuda rise on the hills to the West of the Danube, and today are mostly residential districts.
Let’s introduce now one of the best things to do when in Budapest: experiencing its renowned thermal baths.

We like to mention Gellert Thermal Baths because they are our favourite, clearly this is a matter of taste.
The Gellert complex consists in a hotel joined by the indoor and outdoor baths. They were built in 1912 but its healing waters have been used for centuries.
Healing waters reach 40°C and contain a variety of minerals, which can be useful for treatments of joint and circulatory issues, and asthma problems.
Gellért Spa is famous for its Art-Nouveau styled halls and glass roof.
Other than pure spring water pools of different temperatures, the complex includes multiple saunas, open-air pools, whirlpools and massage services.
The baths are open daily from 6 am to 8 pm and prices start from 5,900 HUF (18€).
Budapest has 9 different thermal baths. Other famous complexes are Rudas, next to Elisabeth Bridge in Buda, and Széchenyi baths, the largest medicinal baths in Europe, in Pest.

FORTIFICATION OF THE CITADELLA

In the same area across Liberty Bridge, we find the fortification of the Citadella, at the top of Gellert Hill.
The fortress was built in a strategic location dominating the city and played an important role during the 1956 Hungarian Revolution.
Nowadays it serves above all as a nice viewpoint over Budapest.

Even though it was built in the Middle Ages, Buda Castle is not the typical medieval castle, not anymore. Over the centuries it has witnessed many dramatic transformations.
Firstly, it became influenced by the Renaissance style brought by Italian artists. Then it was left in ruins and almost abandoned by the Ottomans.
Later it was destroyed during the Great Siege of 1686, when Christians retook Budapest.
The main Baroque structure we see today was built in 18th century and has been renovated in Neo-Classical Baroque style hundred years later.
However, the palace was once more subject to destruction during WWII, when Soviets heavily bombarded it, being the last stronghold of German and Hungarian forces.
After the war, excavation and archeological works permitted to unearth the remains of the medieval castle.
Today, Buda Castle houses the National Gallery and the History Museum.

Included in the castle’s district, the Fisherman’s Bastion is the most stunning building on the Buda side.
Views from the Neo-Romanesque terraces are painted on every Budapest postcard.
The panorama is great any time of the day but, since the official opening time is at 9 am, we strongly recommend to come here earlier.
Turnstiles remain open and access is free before 9, you’ll most likely have to share the place with just a handful of other early birds like you.

Matthias Church rises just in front of the Fisherman’s Bastion, adding even more charm to the area. It is also known for having hosted the coronation of Franz Joseph I of Hungary and Empress “Sisi” Elisabeth.
Located in the Holy Trinity Square, it is possible to hire a taxi or get here by bus n.16, if one doesn’t want to climb up the stairs coming from the riverside.
We do suggest to take the bus and leave the walking part for the way back.

Our guide to Budapest ends here, this should keep you entertained for a 3-4 day stay in the capital of Hungary.
Following under you can find some practical information to make your experience easier.
Check out our posts on nearby destinations such as Slovenia and Austria.

Have a great trip to the Pearl of the Danube!

WHERE TO STAY IN BUDAPEST?

WHERE TO FIND TICKETS INFO?

DO I NEED TRAVEL INSURANCE?