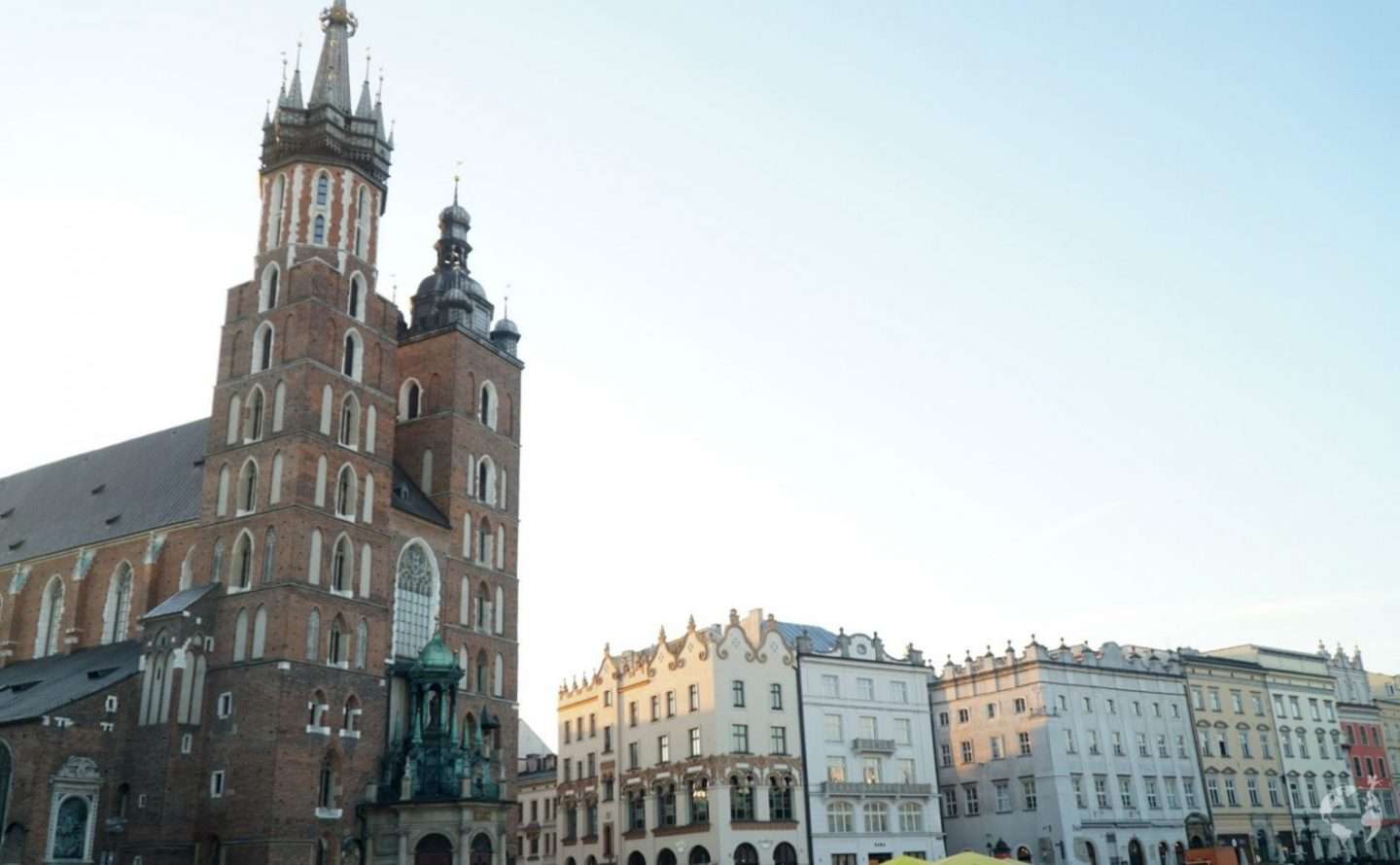 Krakow is one of the most important cities in Poland. Despite not being the nation capital anymore since 1596, when Warsaw was proclaimed, it still remains the artistic and cultural centre of the country.
Krakow is indeed the most visited city in Poland.

Its historical centre is listed in the UNESCO World Heritage and preserves various elements, from the “Lady with an Ermine” painting by Leonardo da Vinci displayed at Czartoryski Museum, to the antique Jagellonica University.

Situated in the South of Poland, Krakow is an essential railway junction and is reachable, other than by plane, by night train from Prague, Vienna, Budapest and Bratislava, the last one being a route we covered during our Interrail trip.

So, here are 5 places to see in Krakow.

The main square, Rynek Główny in Polish, is one of the largest medieval squares in Europe.
In the square’s centre lies the Cloth Hall, today home to the Polish Painting Gallery and other handicrafts and souvenirs shop.
Next to the Cloth Hall rises the self standing Town Hall Tower. The building base was demolished to widen the square.
The small lonely St.Adalbert’s Church (St.Wojciech) is oddly in the middle of Rynek Glowny, with no adjacent buildings, similarly to the Monument to Adam Mickiewicz.
On the sides of the square, the Gothic towers of St.Mary’s Basilica stand out, with their different height and own legends: the trumpet call tower (Hejnał), 81 metres high, and the bells tower, 69 metres high.
TIP: Go up Heinal Tower (price 15 Zloty=4€), for a full view over Rynek Glowny.

During the Middle Ages a watchman used to watch Krakow from the top of the tower day and night, sounding the alarm in case of danger. When the Tatars attacked in 1241 the watchman was pierced in the throat by an arrow, interrupting suddenly his alarm sound. Today the trumpet melody is still played every hour, and is interrupted abruptly to commemorate the heroic watchman who managed to warn the city.
Another legend motivates the height difference between the two towers. They were commissioned to two brothers, the best builders in town, but when one of them noticed that his brother’s tower was higher and more beautiful, he stabbed him to death for jealousy. He then covered his brother’s tower with a dome and surpassed it in height with his own 81-m-tower. Eventually, tormented by the sense of guilt, he hit himself with the same knife and jumped down from the tower.

The quarter of Kazimierz has been the heart of Krakow’s Jewish community for many centuries until WWII.
Originally Kazimierz was divided in two parts: the Eastern Jewish side and the Western Christian one. The communities went along more and more, and in the years the neighbourhood thrived with as many churches as synagogues.
During WWII Nazis moved the Jews from Kazimiers to Podgórze ghetto. Many were assassinated in concentration camps (Auschwitz and Birkenau are about 70 km’s from Krakow).
In the last decades, the monuments, restaurants and bars of Kazimiers have been restored, and the quarter has become a tourist destination both cultural and historic, with its churches and synagogues.
Well known movies like Yiddle with His Fiddle and Schindler’s List were shot in Kazimierz neighbourhood.
TIP: It’s a good idea to have dinner in one of the area’s characteristic restaurants.

Wawel is the name of the hill along Vistula river where, among the many edifices, Krakow’s city castle rises. The Wawel is a much beloved spot for all Polish people. Even when the capital was moved from Krakow to Warsaw, it kept being the most important place of the country.
The Yard of Honor welcomes to the inner part of the castle.
It’s possible to visit the royal apartments, the treasury and armory, the basements, and various other rooms. Besides, you can walk up Sandomierska Tower and down in the Dragon’s Lair, via a stairway within the castle’s walls that allows to reach the riverside too.
TIP: It’s necessary to get a ticket for each part of the castle you want to visit. In order to avoid queuing and wasting time, remember to go and buy the tickets first at the booths opposite to the castle, and only then explore the Wawel.

Another legendary story intrigues the visitor in Krakow.
A dragon used to live in the cave at the Wawel’s feet, and would terrorize local inhabitants for years, forcing them to offer him cattle to satisfy his hunger.
Tired by the continuous sacrifices, the king promised his daughter to the man who’d be able to defeat the dragon.
Cunning young Krakus stuffed a calf’s body with sulfur and when the dragon ate it, he died.
Krakus became an hero, and the city was renamed Krakow after him.
You can see the dragon statue right outside the cave, along Vistula river.

On the same hill is Wawel Cathedral, also known as Cathedral of Saints Stanislaus and Venceslaus. It’s the excellence of sacred places and it’s considered the national sanctuary of Poland.
Its most prestigious component is Sigismund’s Chapel, financed by the king of the same name and designed by Italian architect Bartolomeo Berecci. The squared base is covered by a golden dome and hosts the tombs of several Polish sovereigns.
TIP: Access to the cathedral is free but limited to a short circular way. To enter Sigismund’s Chapel, the Royal Tombs and Museum, the ticket is 12 Zloty (3€).

The historic access to Krakow Old Town is marked by its Barbican, that is a fortified outpost. It was a checkpoint that allowed to proceed towards St.Florian’s Gate and go within the city’s walls.
The Barbican is a thick cylindrical structure built in bricks. In the past it was further protected by a moat, but today the terrain’s level has been uniformed and it’s possible to walk around it and witness its impressiveness.
TIP: A unique ticket allows to visit the Barbakan Krakowski and the Defensive Walls (9 Zloty). As for other partly outdoor monuments in Krakow, it is closed during Winter time (November-March).

If you have two or more days available, it is worth to take daily trips to Wieliczka Salt Mines and Auschwitz-Birkenau concentration camps. They are respectively 15 and 70 kilometres far from Krakow.

Another beautiful Polish city we visited is Wroclaw, of which you can read our post here.

We wish you a great stay in Krakow!

WHERE TO STAY IN KRAKOW?